This famous K-drama was just another thing recommended to me by my friends at CVM. Apparently, all the girls are in love with this show and I had to see why. I found out that a TV company here acquired the rights to broadcast the series in the Philippines (dubbed in Tagalog of course) and since then it’s become really famous here. All the girls go gaga over the boys in this one, and as a guy myself, I have to say that I’m not surprised. As much as it pains me to admit it, the guys in Boys Over Flowers are extremely handsome. I’m sure that many girls would swoon just seeing them.

To put this in perspective, here’s a short synopsis of the drama:

The ‘Iconic Love Story’ for those who wish to stay young at heart forever!
‘Boys over Flowers’ is the highly anticipated remake of the famous Japanese comic book series. Jan-di, the Heroine, is the poor but bright girl who has a strong sense of justice and full of vitality. She transfers to an exclusive high school where only the rich go. In there, she encounters with the four rich and quirky boys and experiences love and friendship.
The storyline illustrates the supreme fantasy that a drama can bring out the most. Each of us probably has an experience of admiring or dreaming of something. The drama ‘Boys over Flowers’ is the concentration of the admirations.

This drama is the last one I’ve completed so far and is by far the longest. It spans 25 episodes at 1 hour and 10 minutes a piece. That’s over 29 hours of drama, right there! This took me about two-and-a-half weeks to finish but again it was worth it.

The story revolves around an simple commoner (Jan Di) and her entanglement with the famous F4, a group of students who are deemed the richest and most famous and influential students at the school. This group consists of Gu Jun Pyo, Yoon Ji Hoo, So Yi Jung and Song Woo Bin. After an accidental encounter with a student at Shinhwa High School, the most prestigious (and expensive) school in the country, Jan Di causes controversy and is admitted to the school to help quell it. Her interactions with two of the members (Gu Jun Pyo and Yoon Ji Hoo) spark off a lot of interesting drama while a lot of comedic actions are intertwined as these rich individuals get used to dealing with love. A more detailed synposis lies here, but don’t read it if you don’t want the story to be spoiled. 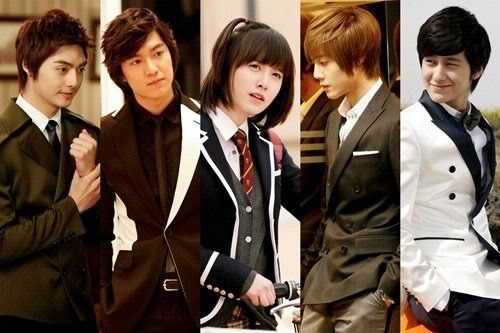 The story is very long, which mostly revolves around the interactions between Jan Di, Gu Jun Pyo and Yoon Ji Hoo. Kim Bum also has a little side-story with Jan Di’s best friend while Song Win Boo does not have much story associated with him during the drama (although he still plays an important part in the F4). I think you can imagine where the story goes when such rich teens get involved with common girls. As inheritor of the most powerful business conglomerate of the country Gu Jun Pyo’s family plays a major part in the story as well, mostly trying to void the relationship between him and Jan Di.

While the drama is much longer than the others I have watched so far, I really did feel for Jan Di during the story, as well as the other F4 members. The more time I spent watching the characters the more engrossed I got in it, to be honest. I didn’t mind that the drama was much longer than the others because I thoroughly enjoyed the story. Towards the end I really felt like I had learned a little bit about hardship and such and so it was an enjoyable drama.

Boys Over Flowers is definitely on the list of recommended dramas I’d suggest to you if you are like me and interested in romantic comedies. The comedy here is usually lighthearted, with all the other themes surrounding them. I found myself laughing out loud, tearing and yelling at the screen while I watched this drama. I never knew I’d have such a reaction to a drama, but this one really was worth the watch.

I’m sure a lot of you would enjoy it.

Now that I’ve covered my thoughts on the dramas I’ve watched so far, I’ll need more suggestions on what I should pick up next! If you have anything, then leave me a comment below. I’d love to hear what you have to recommend to me.

And with that, I think I’m going to take a nap… I’m kind of tired. I will talk to you guys soon!

Who wants some Coffee... Prince?
Funny.