Who wants some Coffee… Prince?

So next up on my list of three dramas is my take on Coffee Prince. In reality, the title of this show was called the 1st Shop of Coffee Prince, but since it’s release it’s just been widely known as Coffee Prince. This show has seen much popularity since it’s release in July of 2007 being broadcast internationally in countries such as the Philippines, Singapore, Indonesia, Taiwan, Malaysia, Israel, Thailand, Hong Kong, Zimbabwe and Venezuela.

The drama stars Yoon Eun Hye from Goong or Princess Hours, Gong Yoo from One Fine Day, Lee Sun Gyun from White Tower and Chae Jung Ahn. The drama revolves around a tomboyish girl that meets a bachelor and coerces him to help her out with her financial situation. The entire drama has a lot of “pseudohomosexual” themes, as the girl does not tell the truth of her real sex to the bachelor for most of the story.

Choi Han Kyul, played by Gong Yoo, is the cocky son of a very rich family who runs a damaged food corporation. He doesn’t believe in love and certainly doesn’t want to get married despite his family’s requests. On the other hand, Go Eun Chan, played by Yoon Eun Hye, is a 24-year old tomboyish female who gets mistaken as a guy quite often. She takes up every job possible — waitress, food deliverer, etc — and has the responsibility of taking care of her mother and younger sister. Eun Chan accidentally meets Han Kyul twice, once on a delivery and once during a robbery. During the robbery, Eun Chan’s delivery motorcycle ends up being damaged. Han Kyul, not knowing that Eun Chan is actually a girl, decides to hire Eun Chan as a false “lover” so that he can escape the blind dates arranged by his grandmother. Meanwhile, Han Kyul’s cousin, Choi Han Seong, is an established music producer and his ex-girlfriend Han Yoo Joo, who Han Kyul secretly loved for nine years, is a famous artist who studied in New York. The two were lovers for about 8 years but their relationship ended when Yoo Joo broke up with Han Seong. Two years after they separated their paths cross again when Yoo Joo returns to Seoul.

After getting an ultimatum from his grandmother, Han Kyul takes over a run-down severely damaged old coffee shop, later renamed Coffee Prince, to prove his ability, both to his grandmother and Yoo Joo. In order to attract female customers, he only hires good looking male employees. In a struggle with money, Eun Chan, whom Han Kyul has already mistaken as a boy, hides her gender identity to get a job at Coffee Prince. Soon feelings start to spark between Eun Chan and Han Kyul. Because he’s unaware that Eun Chan is a girl, Han Kyul starts to question his sexuality.

One of the reasons that I watched this drama was because my Korean friend at the College of Veterinary Medicine, Jae Hyung, was actually a childhood friend of Gong Yoo (Han Kyul), the lead actor in this series. There are many pictures of Gong Yoo and Jae together, and thought it was awesome that I knew someone who knew someone in such a successful drama. And I have to say, I’m glad I watched it. 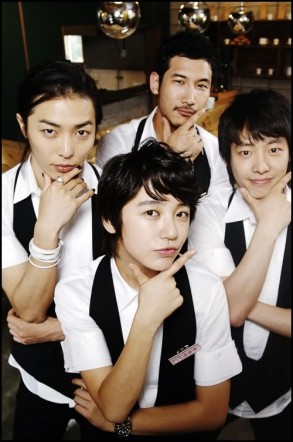 Honestly the first time I started watching this drama I was thinking to myself, “Wow, another girl-has-to-act-like-a-girl story?” I thought I was on a roll… or that Koreans just in general liked the theme of girls masquerading as guys.

All in all the story was pretty sweet. Unlike the girl in You’re Beautiful, I could actually see Yoon Eun Hye being mistaken as a guy. She can look the part if she wanted to, although she’d be a really thin guy with soft skin… 🙂

While the story does have other Coffee Princes, including Kim Chang Wan as Mr. Hong, Kim Dong Wook as Jin Ha Rim, Kim Jae Wook as Noh Sun Ki, and Lee Eon as Hwang Min Yeop, the story really revolves around the relationship between Han Kyul and Go Eun Chan and Choi Han Seong and Han Yoo Joo. These two couples get intertwined in the middle of the story making for a lot of good and interesting drama. The Coffee Princes themselves though are a great addition to the cast, adding a lot of comedy and side-stories to this show which help to pass the time while the main characters figure out their problems.

I unfortunately learned however, while reading up on this show that one of the Coffee Princes, Lee Eon (Hwang Min Yeop) passed away in a motorcycle accident not too long after Coffee Prince was released. It’s quite sad to find out that one of the people in a drama passed away, especially in such a horrific turn of events. He played the simple-minded guy who had a love for Go Eun Chan’s little sister, and he was a lovable character. May he rest in peace.

Coffee Prince in general isn’t so much about the coffee, but about what the coffee shop itself brings together. You’ll see a good development of the characters and their relationships while they sit, talk, drink, walk, paint, clean, eat, and yell in and around the cafe.

It’s a lovely drama and I’m not surprised why it’s been acclaimed internationally. Coffee Prince will really entertain you as a romantic comedy. There are 17 episodes with an addition of an 18th special edition episode, where the cast talks about their experiences on the set of Coffee Prince. That was one thing I liked about watching K-dramas. At the end of the story you’ll always find out a little something about the actors and the production team themselves, for a little behind the scenes action. And you really get to see what the cast felt like while filming particular episodes. It makes for a better ending episode because you get more closure on the drama and see a little bit about what it took to put it all together.

All in all, Coffee Prince is a great drama and will make you laugh and teary eyed, and may do so at the same time. Although this is an old drama, I would surely recommend this to anyone who’s willing to give it a try. Even if you don’t drink coffee, I suggest you try it out. I’m sure you’ll be satisfied.

You're Beautiful
Boys Over Flowers