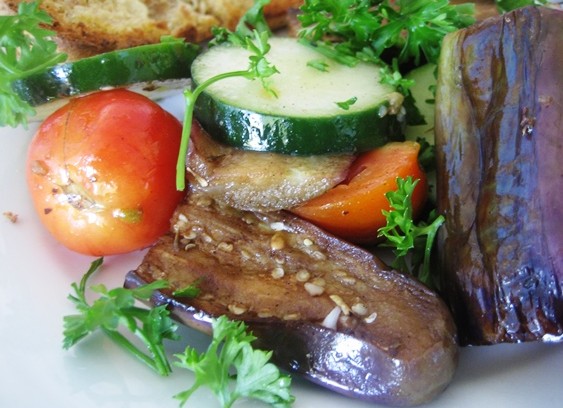 I’ve gotta lot of work to do, but I wanted to share a recipe that I found from Lynn over at the Actor’s Diet. Check out the blog when you have a chance! In the last few days she posted about a wonderfully simple but really delicious Mediterranean salad, and so yesterday I decided to try it out.

You can read the blog about her making this salad here, but I wanted to show you my version of the recipe that she posted.

According to Lynn, her recipe includes the following:

Basically grilled eggplant and zucchini in a special marinade, only available in the US.

I went to the local supermarket here in Los Banos (Robinson’s) to try and see if they had any of the ingredients. They had most of what I was looking for except for the specific Heirloom tomatoes or Persian cucumbers. However, I found out that just the regular small native tomatoes and cucumbers sufficed. I of course couldn’t find the Misto alla Griglia that Lynn used in her recipe since that’s only sold in the US, so of course I decided to see what I could do with 2 extra large eggplant. (Surprisingly, there was no zucchini to be found in the store which was sorely disappointing).

Since I didn’t have any of the already prepared eggplant and zucchini I decided to grill and marinade the veggies myself. Since I only had eggplant that’s all I used. And it turned out like this! 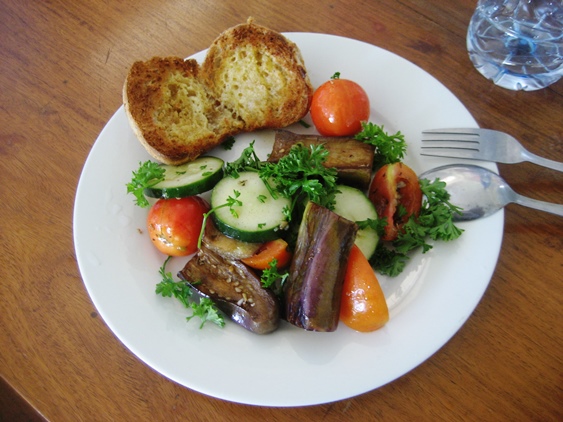 After mixing together all the ingredients I had a zesty, refreshing and totally scrumptious salad. Best part was, that it was all totally healthy and it tasted great! Here’s what I used to make the marinated grilled eggplant my way.

Marinated Eggplant
2 extra long eggplant, cut lengthwise and then cut up into 2 inch pieces
6 tbsp. of EVOO
3 tbsp. of Balsamic Vinegar
1/2 tsp. each of finely minced oregano, thyme and basil
1/2 tsp. of salt and pepper
Mix them all together and grill for 8-10 minutes a piece, while turning.

And there you have it… a perfectly simple, easy, but delicious and refreshing salad. Lynn sure knows what she’s doing when it comes to food! Now I’ve just gotta figure out how to get some avocados so I can try out her ultra simple guacamole recipe at some point…